By: ふぃぎゅ★ぴく
In: native
Tagged: Tony

I filmed “Midnight Companion Alice”, which was released by native, and I’d like to introduce the contents of the film. As a new attempt, we’ve included a video of the figure in this issue, so you can see the appeal of the figure in more detail.
At 1/12th scale, it’s a small piece of work for a figure, but that keeps the price down to just under 7000 yen, which is pretty affordable for a bishojo figure.
https://www.native-web.jp/ 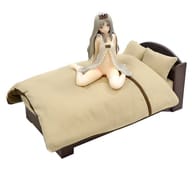 Outer box and packaging. The box was wrapped in thin paper and carefully packaged.
Also about the product, the body of the figure was packed tightly with cushioning and vinyl. Although the box is large for the size of the figure, you can be sure that the figure itself is properly protected.
The parts come with a bed, mattress, quilt and two pillows.

The bedding and pillows are not made of PVC resin, of course, but of cloth, so don’t worry.
The quilt had a wire in it so that the quilt could be rolled up and folded.

Being 1/12 scale, it’s not too big. The figure is approximately 7.5 cm tall on its own and 12 – 13 cm on the bed.
The width of the bed is about 16 cm, including the futon. Although they lack power compared to larger figures, the advantage of smaller figures is that they can be displayed where they will always be noticed.

This is the back side of the figure. The small buttocks are also neatly shaped.

When I opened the box, I was surprised by the smallness of the figure, but even though it was small, the figure was nicely sculpted, and even though it was a figure for adults, I liked the elegance of the eroticism that it conveyed rather than the straightforward eroticism.
The price tag is easy to get your hands on, so it’s a good first choice.
It’s a shame that you can’t cast off, but it’s a shame that you can’t see it. It can be done, so this may be a good thing.

I’d like to experience a life where such a cute little girl waits for you on the futon at least once….

Other works by this manufacturer

Other works by Illustrator

2020-03-28
Previous Post: Comic A Un illustrated by inuburo Kokutenmyo
Next Post: What’s the best way to get the best deals on good condition figures?

Comments are closed, but trackbacks and pingbacks are open.